The Story Behind Spanish Moss

The Story Behind Spanish Moss 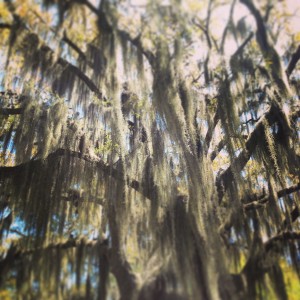 One thing I have to say about our new ‘stopping grounds’ is the beauty that surrounds us is absolutely breathtaking! I feel fortunate that I was born and raised in California, but trying to establish Hilton Head Island as our new home – I’m taking in all the wonders this island has to offer. Spanish moss being one of them. I snapped this photo the other day while we were out on deliveries. I was so fascinated with the story that I thought I’d share with you what I found.

If you are not familiar with the term Spanish moss, it stems from colonial folklore from a time in which the Spanish worked their way up from Florida to the Georgia coast. The story goes that an evil Spaniard, with long flowing beard tried to force an Indian maiden to become his love interest.

The maiden, being more familiar with the area and not having a hankering to hook up so lightly, took to the top of an old Live Oak tree hanging over the water and as the Spaniard made his way toward her, she jumped off the overhanging limb into the creek and swam away.

The Spaniard meanwhile got his long beard caught on a branch and by the time he had cut himself loose, the maiden was long on her way, but the Spaniard’s beard remained in the tree, forming today what is known as Spanish moss.